I suddenly realised I haven’t updated this for a few months, and while I haven’t been especially prolific I have actually completed some more Acid Renaissance artwork, so…

Sketch for “The Lotus Eaters” 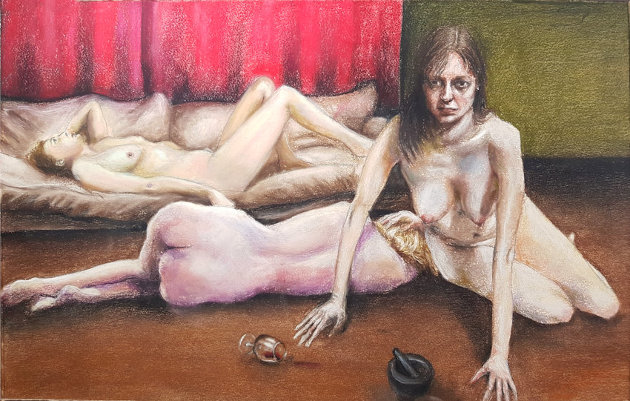 Sketch for “The Lotus Eaters” came together over June, and it’s a strange piece. It’s a harshly-lit scene drawn (again, from photographs of life models) in full colour with soft pastels, something which seems the antithesis of the Acid Renaissance series so far, but for me it somehow fits. The colours of the flesh range from sallow to an almost bruised flush with hints of putrefaction and settling blood. There’s something wrong here. It would be easy to label it as a response to the daily news of bodies falling victim to Covid-19, but I don’t think that’s what this is about. Sketch for “The Lotus Eaters” is not Covid-19 art - it’s about self-destruction, not an external virus.

It’s a “Sketch for” because to me that’s what it feels like - tentatively feeling my way towards a larger idea. I don’t know whether there will be a more final version of “The Lotus Eaters” or whether this fulfils the need to realise it. 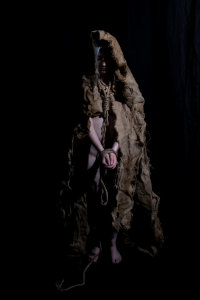 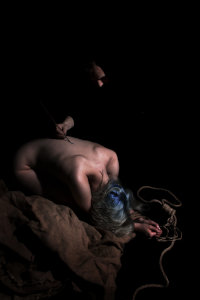 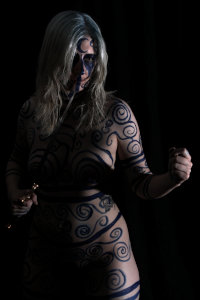 Sacrifice, Transformation, Warrior. This is the first of a number (I’m not sure how many at the moment) of “transformation arc” triptychs that will be part of Acid Renaissance. When planning this triptych I had conceived of it as a series of five pieces, with three interstitial pieces between the first and last, but abandoned these during the creation of the work.

Transformation arcs — typically in the form of triptychs — are probably going to appear several times in Acid Renaissance, reflecting the fact that we are going to need some radical transformations if we are to get through the near future, in terms of the social, economic, political, environmental, and personal.

I do also have some short pieces of video footage of each “stage”, which I may edit together and release at some point. 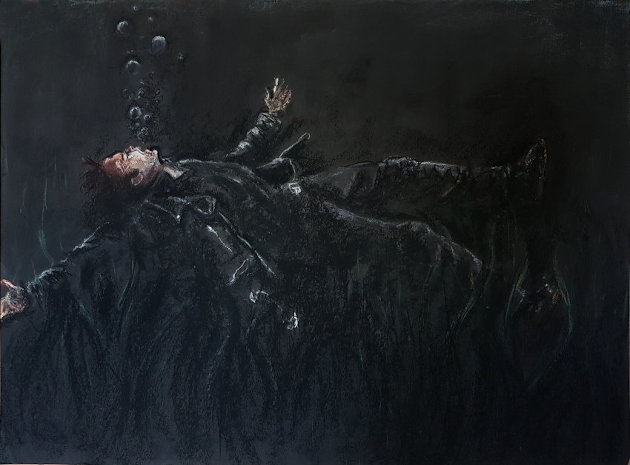 Firstly let me quash the idea that this is any sort of suicidal ideation (because the figure in the drawing is a self-portrait). The reading of IV. Death by Water should be more akin to what I understand is the meaning of the “Death” tarot card: a transformation (I’m no expert in the tarot, so please feel free to correct me if I’m wrong).

This is probably also the first in another transformation triptych. I have plans for the second (tentatively titled Wake), but nothing planned for the third as yet.

The full title references the shortest section of T.S. Eliot’s The Wasteland.

Our Lady of the Cobwebs 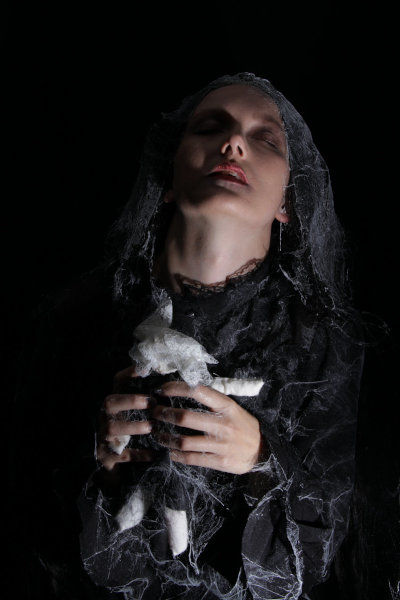 Our Lady of the Cobwebs was created for the cover of Hellebore issue 3 (a slightly different shot from the same session was used for the zine cover), but it fitted in with the Acid Renaissance series well.

This piece is a rare commission (in that I rarely take commissions, preferring to concentrate on my own work), but Maria J. Pérez Cuervo's brief - to create my version of the cover for one of the paperback editions of The Dark World of Witches by Eric Maple, but in my own style - was irresistible. My photograph takes the pulp cover illustration and amplifies and subverts the inherent catholic christian iconography of the Virgin Mary (with a hint of Miss Havisham).

I’ve mentioned the Wake drawing above, which is going to be quite large and will take some considerable time to complete.

I’m also planning to get to work on the Lady of the Orchard, the Shadow of Winter on the Land (both single photographs), and the Bride of the Sun (another transformation arc in the form of a photographic triptych), and hope to have these done over the next few weeks. I also have vague plans for a Fae triptych, but I don’t know whether that will be realised this year.