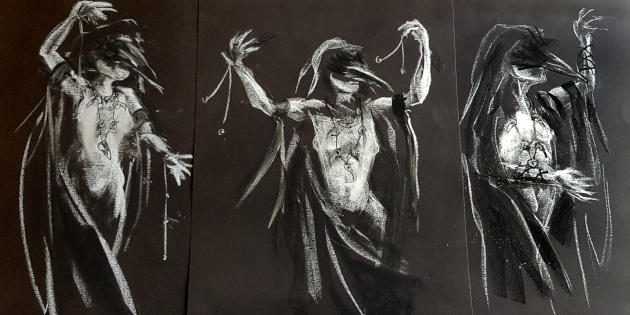 There is a great power in a deliberate temporal dissonance that stops you in your tracks and forces you to reassess. The TV series Britannia did it wonderfully, combining Celts and Romans with psychedelic rock (and so I’m delighted that it will be back for a second series, and if we don’t get a full-on mud-and-shit battle scene to the strains of Jefferson Airplane’s White Rabbit I shall be severely disappointed).

Deliberately-crafted dissonance, the antithesis of muzak, makes you engage rather than consume. That demand to engage will narrow your potential audience, causing a lot of people to reject rather than engage: as Britannia writer Jez Butterworth said we’re broadcasting on a frequency that some people clearly won’t get and I’m fine with that.

Temporal dissonance is one deliberate element of my Acid Renaissance series of artwork. I’ve been introducing it at a fairly low level so far — the hint of a laptop keyboard next to an antlered Oracle, the distinctive metallic blue and orange chevrons on the spine of Julian Cope’s The Modern Antiquarian next to a repurposed Saint Jerome — but I’m planning to increase it as the series progresses.

Dissonance of another sort is present between the strand of photographs which, as I’ve mentioned in an early post on the series, borrow the clothes (temporal anomalies aside) of popular fantasy and folk horror, and the strand of linoprints that depict various points from England’s radical political history. I plan for this particular dissonant relationship to phase-shift into something more harmonious, like two rhythms slowly falling into the same time-signature.

I feel like I will be dealing with several seemingly contradictory forces in this series because I’m trying to set out a vision of a radical future England which, harking back to my post on Fisher and capitalist realism, is almost impossible to imagine. And sometimes the only way to express something like that is to present multiple images and let the vision emerge from the space between them.

One good thing is that I will now have more time to work on the series. As of May 1st I will be going part-time in my day-job — from 5 to 3 days a week — which should hopefully give me a huge boost in time, energy, and mental space for my artwork. I recognise that I’m lucky to be able to afford to do this - many artists, writers, and musicians don’t have this option. But I still need to sell more of my artwork on my online shop to compensate for my reduced pro-rata salary.

So while I prepare for a much-welcome tectonic shift in my work/life balance, here’s a list of Acid Renaissance pieces that I need to start work on, or finish work on:

I’m afraid that this has been a somewhat disjointed post - I hope to return to something a bit more structured very soon.