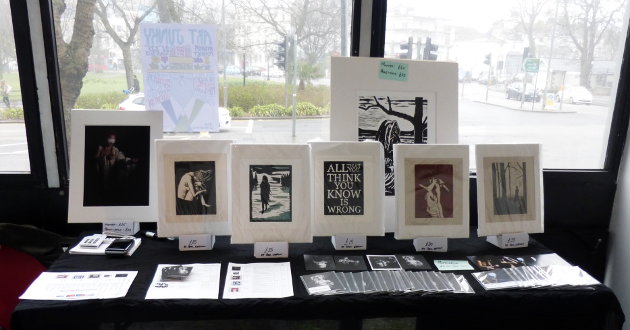 So, I did another stall at a local art fair (Art Junky at the Brighton Phoenix, as mentioned in this post earlier this month) displaying and selling my prints.

I have mixed feelings about spending a day sat by a stall at an art fair. The main negative point is that I don’t sell that much - certainly not compared to my sales through my online shop. I’ve always been happy selling online, and I have the entire world as potential customers, rather than the few hundred people in the local area who can be bothered to leave the house on a grey, squally Saturday in Brighton to venture to a small art fair.

One of the positives, however, is that I do get my artwork in front of people who might never have come across it online, and yesterday I was certainly handing out plenty of business cards with this website’s URL on to the various people who stopped and said nice things about my work.

It’s also interesting to see which particular pieces of my artwork catch the attention of people passing by, which they linger in front for longest, which they ask the most questions about, and which they keep going back to look at. I could probably get an approximation of this by doing some long and detailed analysis of my Google Analytics stats, but it wouldn’t be anywhere near as revealing (and Google Analytics doesn’t record people’s expressions!).

So I’ll probably keep doing such things, at least for the time being. I think there’s another “Brighton Bazaar” coming in June which I’ll do if it doesn’t conflict with anything else I’m planning.