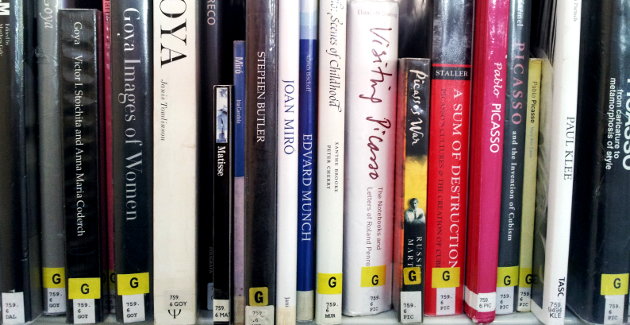 If you’re in the UK then you’ll probably be aware of the threat to public libraries due to local government cuts imposed as part of the Conservative government’s dogma of austerity.

As a child I read through more library books than most. It was a habit that started with fiction but in my early teens I started to get interested in art.

Art books are frequently large, often heavy, and always expensive. The price levels are due to the huge cost of high-quality full-colour litho printing required to print pictures of artwork, something I can personally vouch for after recently self-publishing a book of my own artwork. Most ebook readers are black-and-white, and colour reproduction on smartphones and tablets is never accurate, so this is one area where digital can’t yet compete.

These days art books typically cost £25-£60, and some are a lot more than that. They are carefully-considered occasional purchases: an expensive luxury, in other words. But free access to them for children and teenagers is an absolute necessity if we’re to have another generation of visual artists.

Without my local public library in the 1980s I would never have been able to discover and study art, to build up an enthusiasm and an understanding that led to me choosing it as an A-Level subject, and later go on to art school to gain a degree in it. I didn’t even own my first art book until I was about 17, but for several years before that I would borrow six or more every month from Coventry’s Gulson Library (a lovely old building, with stone pillars and arches inside) and its later modern replacement on Smithford Way.

Cuts to public libraries will affect literacy, and they’ll also affect the early development of skills and knowledge in young people. For me that was art, but across the aisles from me in the old library in Coventry were other kids who were discovering and borrowing books on electronics, music, engineering, architecture, the sciences, archaeology, history, and all the other subjects in the whole damn Dewey Decimal system. Public libraries are the means by which a child’s fleeting enthusiasm for something becomes a burgeoning hobby, then a highly-skilled career or vocation. Without them we’re in serious trouble.