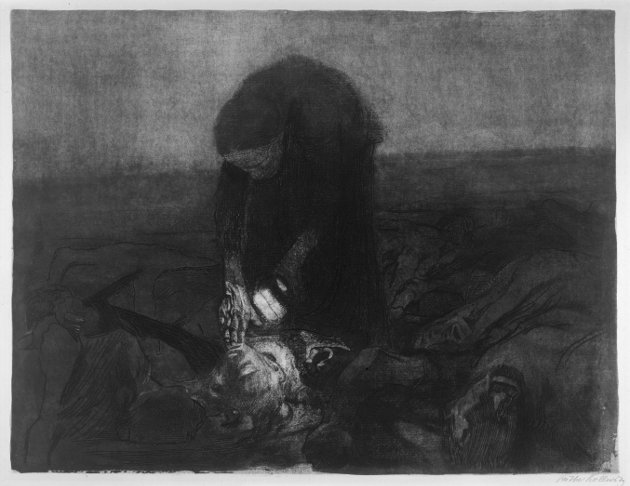 I’m just back from a 2-day holiday in Berlin, a city where the ghosts lie close to the surface, cross-hatching the modern city.

On Friday I walked for hours following the ghostline of the Berlin Wall, a strange and sombre journey taking in the Holocaust Memorial, the Brandenburg Gate, the Reichstag, Checkpoint Charlie, and the Führerbunker.

This post is not about them—I don’t have the words to describe them, especially the descent into/amongst the Holocaust Memorial—but about two exhibitions which were similarly haunted by German history.

This exhibition (in English “The Black Years - Histories of a Collection 1933–1945”) at Berlin’s Hamburger Bahnhof Museum features works from the Nationalgalerie which were either created between 1933 and 1945, acquired by the collection during this period, or seized by the Nazi regime.

Including works by Edvard Munch, Otto Dix, Käthe Kollwitz, Ernst Ludwig Kirchner, Pablo Picasso, and many others, this exhibition documents the early-mid twentieth century European art that the Nazi regime found problematic and so censored it as “degenerate” (Entartete Kunst), prohibiting its sale or exhibition, and dismissing the artists from any teaching positions they held. Some Expressionist art was initially allowed during the early years of the Nazi regime, but Hitler eventually spoke out against any modernist experimentation.

Sometimes it was the style or subject matter of the artwork that attracted the censure and censorship of the Nazis, other times it was the artists themselves - if they had socialist, communist, or trade unionist beliefs, or if they were Jewish.

A highlight of the exhibition for me was Melancholy (The Reinhardt Frieze), a rarely-reproduced painting by Munch depicting a solitary woman sitting hunched over beside a lake or sea. The paint is sparsely applied and the raw canvas shows through in large swathes.

Not all the artwork on display are examples of “degenerate” art - there are also a few examples of artwork approved by the Nazis and lauded by them as examples of the type of art they wanted to see, and they were all examples of utter blandness and lack of inventiveness in visual art. Since not all of the “approved” artists were Nazis themselves, I suspect that in some cases the blandness was a side-effect of the artists’ desperate attempts not to offend the sensibilities of the Nazi regime who could destroy their lives and those of their families.

The exhibition continues until 31st July 2016. More details on the gallery website.

Käthe Kollwitz’s drawings and prints have increasingly fascinated me over the past few years. Her life stretched from the beginning of the German Empire, through the Weimar Republic, to within a few days of the end of Nazi Germany, incorporating both world wars and massive periods of political upheaval and terrible conditions.

As mentioned above, Kollwitz’s artwork was classed as “degenerate” by the Nazi regime. While she wasn’t a card-carrying communist/socialist party member or a trade-unionist, her artwork clearly shows strong left-wing leanings, and this was enough for the Nazis to censure her and have her expelled from her professorship at the Berlin Academy of Art.

She was also very much out-of-favour with the political elite during the years of the German Empire - her dramatic and class-conscious series of six prints The Weavers was proposed for the gold medal at the 1898 Berlin Art Exhibition, but was vetoed by the Emperor who described any art of social content as “gutter art” (Rinnsteinkunst). The Weavers did win a gold medal in an exhibition in Dresden the following year, and received a prize in a London exhibition the year after.

While now free of government censure, Kollwitz’s work is frequently side-lined or even completely ignored in many works on German art from the same period. I suspect that much of this is due to sexism, reflecting not only a desire to ignore her work because she was female, but also because her work frequently dealt with issues specifically about women and motherhood.

Other themes in her work, such as the desperate conditions faced by the poor during the days of the Weimar Republic, also jarringly dispel the myth of Weimar Republic Berlin being one continuous bright and hedonistic night out, as portrayed by the likes of Otto Dix. Whilst some social democratic progress was certainly made between 1918 and 1933—a maximum 48-hour working week, health insurance extended to wives and daughters without their own income—the global economic depression combined with hyperinflation caused by the ruinous reparations forced on Germany for the First World War meant that everyday life for many people was desperate.

Kollwitz’s artwork is usually monochrome, and dark in both tone and mood - sombre, melancholy, brooding, or angry. Her charcoal drawings exhibit the movement and directness of mark-making that characterise the Expressionist drawings from Germany at that time, but somehow manage to be delicate at the same time, showing a more subtle command of drawing than most of her contemporaries.

Her woodcuts are very much in the style of other German Expressionist printmakers, but for me it is her lithographs and etchings that stand out as examples of excellence.

Information on the Käthe-Kollwitz-Museum can be found on the museum website.

Various biographic details about Käthe Kollwitz in the post are taken from Prints and Drawings of Käthe Kollwitz by Carl Zigrosser, published by Dover Publications Inc. (1969).