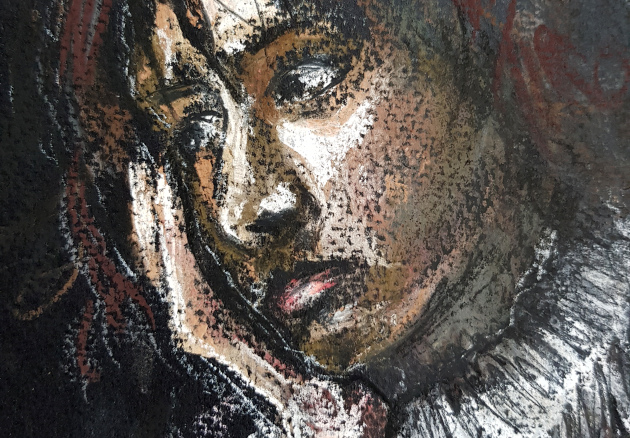 My original plan was a very large scale, multi-figure, drawing of the Court of Queen Mab, but I simply don’t have the room - I’d need a large studio space to attempt something like that. So instead my amended plan is to make five or seven “Studies from the Court of Queen Mab”, which will form another mini-series as part of my wider Acid Renaissance series. These will be reasonably large scale pastel drawings on black paper, drawn from life, the first of which—Study of a Figure in the Court of Queen Mab (1)—is now uploaded to this website, and also shown below.

Shelley’s poem Queen Mab is a key to the underlying theme, with its radical rant against monarchy, religion, and politicians, and its idea that humanity will achieve some kind of utopia simply because human virtue would naturally lead us there. I’m certainly not quite so sure that a utopia is a natural and predetermined fate of human society - utopias have to be constantly fought for, and even then they are, as I’ve mentioned before, a direction of travel rather than a destination.

In fact, as things are at the moment, I’m fairly certain that Shelley’s optimism is misplaced. Fires are raging across Greece and Turkey, and numerous tipping points are being rapidly approached, if not passed: methane from ever-growing herds of cattle bred for meat and milk (as well as shale gas and oil extraction) is accelerating climate change as emissions from cows on New Zealand dairy farms reach record levels, and scientists have spotted warning signs of the collapse of the Gulf Stream. And amongst all this the reaction of governments, not just in the UK but worldwide, seems to be to procrastinate and dither (apart from making speeches and vague future commitments) amid worries about the effect of actually doing anything about climate change on the lucrative and powerful corporations that are causing it. And so we continue the downward slide…

So this is not quite Shelley’s Queen Mab, assured of the eventual redemption and utopian existence of humanity, but one who is aware of a multitude of possible futures, reliant on choices and actions. The next few drawings in this mini-series will hopefully emerge over the next couple of months.