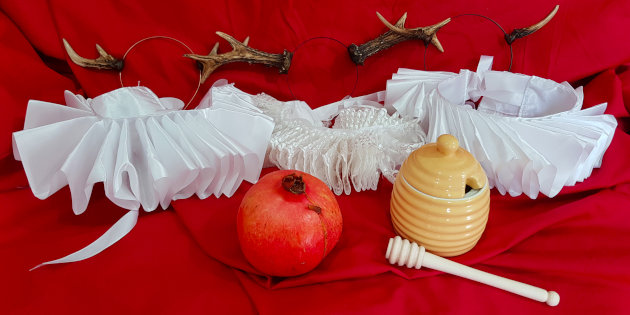 A couple of weeks ago in my last blogpost I wrote about my plan to make a number of Studies from the Court of Queen Mab, which will form an arc or mini-series as part of my Acid Renaissance series, and introduced the first drawing from this arc.

This drawing, like the others I am planning, was drawn from life - working with a life-model for a 3 hour session, with plenty of breaks for both the life-model and me to stretch our muscles and for me to spray layers of fixative over the pastel marks, building up layers of colour.

One notable difference between this first drawing and many other life-drawings I’ve done is the inclusion of a background and props. Typically life-drawings will focus purely on the human figure, with the background either completely ignored or only hinted at (e.g. a few sketchy marks to indicate a chair that the model is sitting on). Study of a Figure in the Court of Queen Mab (1) includes the fabrics that I draped over the model’s seat, as well as a large brass platter. In this inclusion of background detail the drawings will have more in common with England’s Dark Dreaming, my 2016–2018 series of charcoal drawings, which coincidentally are pretty much the same size as the Studies from the Court of Queen Mab.

In this post I want to look at some of the other props I’m planning to use, and why I’ll be using them. This will not be a complete list by any means as I’ve only really got the next two drawings vaguely planned in my head, but I hope it will start to give an explanation of the various ideas and influences that permeate this arc of drawings.

As I mentioned in my previous blogpost, the function of Queen Mab (and her court) within the wider Acid Renaissance series is taken from her role in Shelley’s Queen Mab; A Philosophical Poem; With Notes of 1813, which was a particular favourite of the Chartists, where Queen Mab acts as a guide showing humanity, in the form of Ianthe, visions of brutal and tyrannical past and present, followed by a more utopian future.

The two most obvious props which appear in Study of a Figure in the Court of Queen Mab (1) and will appear in all the other drawings in the arc are a white ruff and a set of antlers/horns.

The use of a ruff, especially on an otherwise unclothed figure, emphasises its status as a symbol rather than an incidental prop. I decided that I wanted all the Fae characters from the Court of Queen Mab to have a Tudor aspect, drawing on the concept of faeries that was reflected in Shakespeare’s A Midsummer Night’s Dream and Spenser’s The Faerie Queene, while also distancing the figures from the Victorian concept of fairy. This Tudor dimension also creates references (in my mind) to some of Derek Jarman’s Jubilee (particularly the character of Ariel), and also Sally Potter’s 1992 film adaptation of Orlando.

The selection of the Tudor period is also a deliberate reference to the status of England at that time, following Henry VIII’s break with Rome - a small pariah state isolated from Europe, highly factionalised and religio-politically at war with itself (and, unknown to those at the time, with an actual civil war approaching a century later).

The antlers or horns (I’ve been using resin replicas) are simply used as a signifier that the figure is faery rather than human. Horns also traditionally signify power.

Food and drink will appear in future drawings in this arc, specifically pomegranates (which have an overabundance of symbolism in various cultures and religions), bread (similarly layered with multiple meanings), wine, and honey, complete with archetypal honeypot and wooden honey dipper (all of which always reminds me of myths of endless honeypots, as well as tales of Mellified Men and their uses). Faerie food and drink, of course, should never be accepted by visitors without due awareness of the consequences.

Just for note: the brass platter in Study of a Figure in the Court of Queen Mab (1) has no particular symbolism, and is included solely for purposes of composition and aesthetics, particularly for the pleasant reflection of the red fabric on it (and on the figure’s calf).

The draped fabrics will be a recurring background. They serve two main purposes. The first is to add large swathes of bright colour to each drawing, increasing the feeling of luxurious glamour (and I use that word with particular emphasis on the connotation of enchantment and beguilement that applies to “faery glamour”). Secondly, by hiding any actual furniture, they serve to provide an almost atemporal setting, taking the court (and realm) of Queen Mab outside time. This atemporality deliberately contrasts with the Tudor references mentioned above.