I wrote about the first drawing in this series-inside-a-series back in early August, and I wrote about some of the props and references later that month. Since then I’ve finished the second and third drawings in the arc.

The next drawing, Study of a Figure in the Court of Queen Mab (2), is in many ways similar, but takes a slightly new direction in terms of technique. The chiaroscuro is reduced, and larger plains of colour are introduced. These changes were prompted by a visit to the Paula Rego exhibition at Tate Britain, and while I can’t hope to approach her brilliance with pastels, I couldn’t help but be influenced by her technique.

Besides the ruff and antlers (which will continue across the whole series) the props—pomegranates, grapes, and honey—speak of luxury and plenitude, but with the folkloric warning that accepting food or drink in the Court of Queen Mab guarantees you’ll never leave (an alternative folktale is that their food is dross, but made to look enticing through glamour). 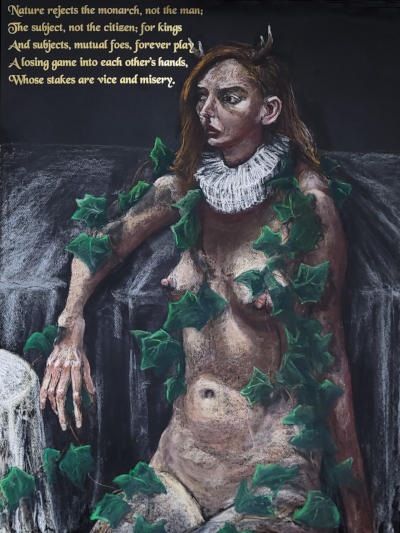 The most recent drawing finished earlier today, Study of a Figure in the Court of Queen Mab (3), has the figure from the Court wreathed in ivy, highlighting the connection to nature and woodland in particular. The colours are less intense because there is less glamour at work.

Nature rejects the monarch, not the man;
The subject, not the citizen; for kings
And subjects, mutual foes, forever play
A losing game into each other’s hands,
Whose stakes are vice and misery. The man
Of virtuous soul commands not, nor obeys.
Power, like a desolating pestilence,
Pollutes whate'er it touches; and obedience,
Bane of all genius, virtue, freedom, truth,
Makes slaves of men, and of the human frame
A mechanized automaton.

Again, I think it’s worth repeating that Shelley’s poem Queen Mab is a key text for understanding this mini-series. It’s a political tract with fairly strong anarchist leanings, as is obvious from the fragment above.

I am considering adding selected lines from the poem to the backgrounds of the drawings.