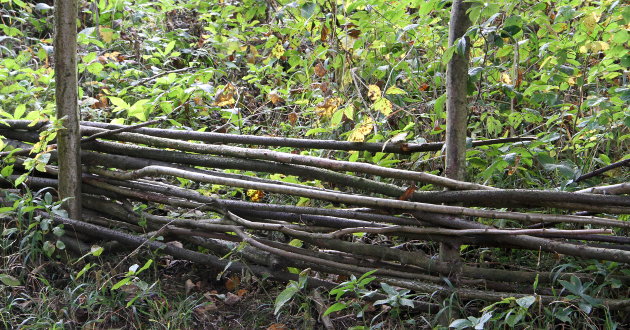 On some days, when the veil between worlds is at its thinnest, it is said that you can glimpse the mythical land of Deep England, particularly if you read the Daily Mail, the Daily Express, or the Daily Telegraph too much.

Invariably rural and white, Deep England manages to simultaneously be Medieval, Georgian, Victorian, and Interwar - where ruddy-faced yeoman farmers tug their forelocks at the local squire while their wives practice traditional rural crafts to the sound of church bells and the smack of leather on willow. John Major conjured it up in his 1993 speech to the Conservative Group for Europe (which probably now consists of three people and a stray dog) when he declared:

Fifty years on from now, Britain will still be the country of long shadows on county grounds, warm beer, invincible green suburbs, dog lovers and pools fillers and, as George Orwell said, ‘Old maids bicycling to holy communion through the morning mist’ and, if we get our way, Shakespeare will still be read even in school.

The embedded Orwell quote comes from his 1941 essay England Your England, and is probably the only part of Orwell’s essay that a Conservative Prime Minister would dare to quote publically - well, apart from some pretty appalling non-English national stereotypes which would probably go down well at their next party conference given the increasing dominance of the more extreme right in the Tory party lately.

In his speech Major referred to Britain, but he’s actually talking about a dream of England, and not just any part of England, but Deep England. In his 1991 book The Myth of the Blitz, Angus Calder defined the boundaries of this dream:

There was a Green and Pleasant heartland, ‘Deep England’, which stretched from Hardy’s Wessex to Tennyson’s Lincolnshire, from Kipling’s Sussex to Elgar’s Worcestershire. It excluded, self-evidently, the ‘Black Country’ of the industrial Midlands and the north with its factories and windswept moors. It included those areas of the Home Counties around London which had not been invaded by suburban development. Parts of Kent, for instance, were ‘deeper’ than anywhere, but areas of the country closer to London were commuter territory.

Deep England is Tolkien’s Shire (without the Nazgûl), Midsomer (without the Murders), and a hundred other locales, none of them real.

And while it doesn’t exist, and has never existed, it is a powerfully enticing auto-stereotype, but for many—particularly many who live in urban and suburban areas, and especially, but not exclusively, on the political right wing—it is a vision of how things were and should always be.

This is not to say that your dreams of living in a “characterful” house on the outskirts of an English village—with a spacious kitchen-diner with a range and Butler sink, cosy living room with a multi-fuel-burning stove in the inglenook fireplace, master bedroom with ensuite and dressing room, and enough land to have a veg patch and maybe keep some chickens—has turned you into a frothing member of the Tory/UKIP grassroots. Honestly, if you add a studio, that’s probably my dream house too. The BBC is not peddling Escape to the Country as a gateway drug leading to racism and the far right.

In his 2001 BBC Proms Lecture Deep and True? Reflections on the Cultural Life of the English Countryside—and in the wake of the Foot and Mouth outbreak—Patrick Wright spoke of the English countryside in its mythic role (PDF):

I think this is also an appropriate time to reflect on the cultural dimension of the countryside. Not so much the way we farm it, but the way we have imagined it as something closely connected to our sense of identity, both locally and in a more national sense. The countryside, then, as a repository of values that neither farmers nor scientific conservationists may immediately recognise as belonging on their turf: ideas like innocence, beauty, peace, tradition, nature and, of course, nationhood too.

This concept of Deep England is so prevalent, so enticing, because it has been so constantly fed to us over the past hundred years. It has become a deeply-ingrained myth, even by those who know it is a myth.

And of course there are problems with this myth of Deep England. Deep problems.

In 2011 Brian True-May, the producer of Midsomer Murders, was suspended after saying that We just don't have ethnic minorities involved. Because it wouldn't be the English village with them…it just wouldn't work. Suddenly we might be in Slough…We're the last bastion of Englishness and I want to keep it that way. He continued to dig himself deeper into a hole while muttering something about political correctness. A few days later, after a non-apology (Brian apologises if his remarks gave unintended offence), he was reinstated as producer, then stepped down at the end of that year’s series. I can only presume it was one of those complicated dances involving HR, PR, and lawyers that happens behind-the-scenes when you reach a certain level in British society, that ensures that no one on any side is publically seen to be held to account for their actions while still getting rid of the person who should have been, but without any unseemly fuss or lawsuits. The following series apparently saw more racial diversity introduced into the show.

The problem isn’t just about a producer of Midsomer Murders, though. The myth of Deep England is, as I mentioned at the beginning of this piece, invariably and exclusively white. True-May’s comment that racial diversity wouldn’t work in Midsomer Murders, and the use of the phrase last bastion of Englishness suggest that racial diversity is an existential threat to the myth of Deep England. A bastion, after all, is a part of a fortification meant to keep people out.

Deep England is also rigidly class-structured, with everyone contently knowing “their place”, and those who dream the myth certainly never picture themselves as farm labourers doing manual work for minimum wage. In Deep England, as under New Labour in the late 90s, it seems that we’re all middle class now. The myth is about the dream of rural English life, not agriculture. As Calder (1991) describes, for both the conservatives and the avant-garde among the British propagandists in the 1940s:

The decline of rural crafts in the face of mass production struck a nerve; less so the pauperised condition of farm labour.

The Guardian took a swipe at the myth of Deep England in April 2017, but couldn’t bring themselves to stick the knife in too deeply because, well, that just wouldn’t be cricket. But their argument that the Deep England myth was a driver for Brexit is certainly true.

As I said earlier, social myths such as Deep England are persuasive, enticing, and deeply ingrained. As a national myth it probably won’t go away, but it can be remade. Myths are, according to Joseph Campbell, society’s dreams. And by that definition they are collectively-owned and therefore collectively-mutable.

Unlike Star Wars, there is no unalterable “canon” that cannot be changed. In the mid-twentieth century no imagined scene of Deep England would have been complete without a fox hunt. However social attitudes changed over time, culminating with the Hunting Act 2004 which banned fox hunting and hare coursing (although there are many allegations that criminals continue with illegal bloodsports). A recent opinion poll showed 85% of people now against fox hunting—an all-time high—with even higher numbers against deer hunting, hare coursing, badger baiting, and dog fighting.

As I’ve been drafting out this piece the Guardian published an article by Alex Preston, If our landscape truly belongs to us all, we must stop romanticising it, which makes some very good points about how (and why) the current Conservative government’s environmental policies, on the surface based on sound ecological principles, feel like they have a covert political instinct behind them.

And of course that covert political instinct is another attempt to shape or constrain the myth of Deep England. Preston’s Guardian article includes an interview with author Melissa Harrison, in which she poses a very apt question:

When it comes to the fetishisation of place that happened in the 1930s, and is happening again now, it’s vital to ask: who does this vision serve and who does it exclude?

I don’t think that the myth of Deep England, the fetishisation of place (or of a place that has never existed except in myth), is going to go away - it’s too deeply embedded. But as the change in public opinion over bloodsports shows, the collective myth of Deep England has been changed for the vast majority of society, in one aspect at least, over the past 20-30 years. This means it can be changed in its other aspects.

Myths constantly change as society changes, but the change feeds both ways. A change in society will feed into the myth, but also a change in the way the myth of Deep England is invoked—in art, in literature, in films and TV shows—will feed back into society. That’s just one of many reasons why diverse representation matters in the arts, and why I have been deliberately seeking out people of colour to life model for this year’s work on my England’s Dark Dreaming series of drawings.

And since myths act as templates within a society for how to conduct yourself and what standards to uphold, a social mythscape that is exclusively white implicitly suggests that racism is acceptable. A myth that uncritically presents the class system or sexism indicates to society that class discrimination or sexism are acceptable. And the same applies for sexualities, gender identities, and so on.

This is why such minor-sounding changes send the far-right into rabid rage. A muslim woman winning the Great British Bake Off; a female actor playing Doctor Who - why would these tiny things provoke such a huge response from the far right? Why do they immediately trigger numerous dog-whistle articles in the Daily Mail?

It’s because they incrementally reshape the social myth. Each change is a precedent, a small alteration in the shared social myth that both controls us and that we control. These aren’t shouts of rage from the far right, they’re howls of fear and loss, wounds from yet another irrevocable progressive change in the myth they thought that they owned and which served them.