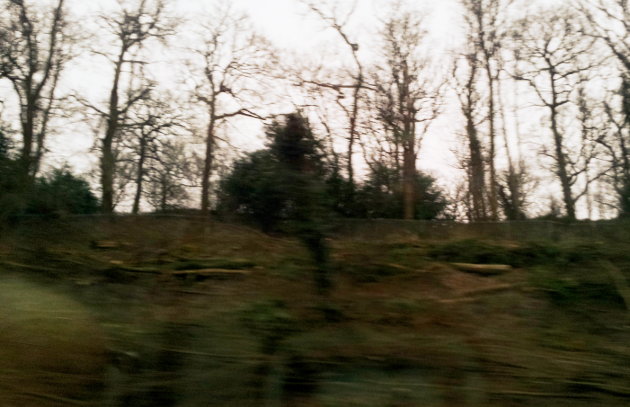 I took this crappy photo on my phone on Wednesday, watching the landscape between Brighton and London blur past through the train window. It’s too close to the main line to be “true countryside”, and too deep in the countryside to be urban.

There’s an increasing body of work that’s sprung (I believe) from psychogeography about Edgelands (the debatable space where city and countryside fray into one another). In many ways it feels like overly-romanticised nostalgia for those strips of “just past suburbia, but not quite in the country yet” where people of my age spent their childhoods in the late 1970s and early 1980s.

I spent a fair few years creating assemblages and collages from the detritus of decaying edges of urban and semi-urban infrastructures, but they weren’t the edges in any geographic sense. They related to where I was at the time (both geographically and emotionally) and to my childhood, and explored the edges of the urban where it crumbled into something else (but not the countryside, more like the other side of urban).

But I never had any nostalgia for these places. Yes, they are interstitial places, and such liminality is always thought-provoking, partly because it can make you look with a different perspective at the two sides that border it, and partly because the liminal state—betwixt and between—is a special state that is fascinating purely because of its undefined and transitory nature.

But I can’t summon any nostalgia or fascination for 1960s concrete culverts adorned with 1970s racist graffiti just off the A45 as it curves south of Coventry where the city limply peters out. The memory of sagging chain-link fences, an occasional broken plastic traffic cone, discarded bags of solvent, and a stack of forgotten sewage pipes nestling in the overgrown gone-to-seed grass of the almost-but-not-quite countryside by the dual carriageway, is not a fond one. It’s a liminal aesthetic in itself, sitting in a best-forgotten shithole between heroin-chic and the bucolic idyll. It’s 1982 glue-sniffer-chic, and that’s a look (and a time) that never deserves a revival.

I like looking at the countryside through the train window, but I always wish the train wasn’t there.