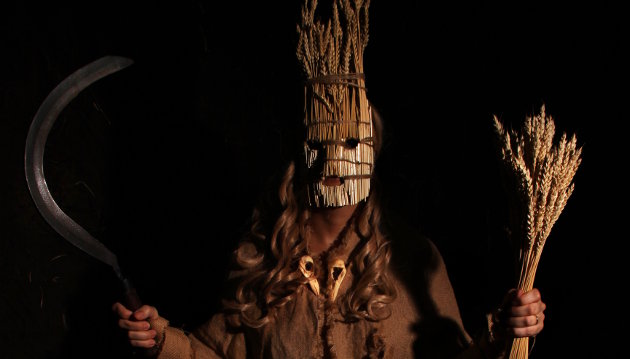 From the beginning I think it’s worth emphasising the fact that I don’t see myself as a Folk Horror artist, and I don’t see my artwork as being “Folk Horror” - my starting points are very different. But in my recent work I do sometimes borrow some of Folk Horror’s devices and metaphors to allow me to reference archetypes and concepts which enrich the artwork.

To help explain this, here’s Andrew Eldritch of the Sisters of Mercy talking about his approach to writing lyrics:

‘Floorshow’ quoted ‘The Fire Sermon’, Part III of ‘The Wasteland’ directly or tweaked Eliot’s verse. “There’s hyperlinks in all of it,” states Eldritch. “If you can stick three words of T S Eliot into a line you’ve automatically involved and enveloped the whole of The Wasteland and that just enriches what you do. ‘Floorshow’ is a very brazen example.”

And so I can make an allusion to something from Folk Horror, a visual hyperlink to a concept that otherwise would be impossible to depict, and by having these hyperlinks embedded in my work they provide a frame of reference—a framework of references—for the person viewing the artwork, setting up expectations of the underlying concepts the work will be dealing with.

In the same way I’ve also used the more traditional visual hyperlink of re-creating (a section of) a famous piece of artwork (one of Gustave Doré’s illustrations to Dante’s Divine Comedy, specifically the print depicting Virgil and Dante in the Antenora region of the Cocytus River, the circle of hell reserved for traitors to their country), and acknowledged the reference in the traditional art manner, appending “after Doré” after the title. This not only allows me to reference Doré but also Dante’s Divine Comedy at the same time, and those references are vital to understanding the intention of the work (in addition to its relationship with the wider series).

This all hopefully explains how I am trying to use references to Folk Horror in my work - they allow me to reference a reasonably familiar set of devices that can be used as metaphors that work as mental hyperlinks to bring into the piece of work a framework of wider concepts that otherwise would be impossible—or, at very least, messy—to depict. Obviously this isn’t, by any means, a new idea in the world of art.

The specific underlying themes that Folk Horror is concerned with lend themselves very much to a number of issues facing us today, particularly in Britain, and especially in England. And Folk Horror overlaps considerably with what Robert MacFarlane termed the “English Eerie” - although of course not all Folk Horror is either English (although some is) or eerie (although most is).

With that said, I do think it’s time to look at what the use of an occasional Folk Horror device allows me to reference:

And this brings us back to Adrian Bott’s thread which you can read here by clicking through to Twitter if you haven’t already:

Worth asking *why* Folk Horror is enjoying a revival. Maybe start by looking at themes of 'the outsider', isolation, relapse, xenophobia.

I think that most of the points are covered in Adrian’s thread. I should note that I don’t think that Folk Horror embodies a xenophobic, “our local old ways are better than your new-fangled nonsense” outlook. In fact that’s clearly the opposite in many Folk Horror classics: the horror in Folk Horror is frequently the local/old ways. I do think that Folk Horror provides a set of readymade expectations that allow an artist (or writer, or filmmaker etc) to explore these concepts.

The English Civil War crops up as an historical setting in Folk Horror with more frequency than many others for a good reason too - it’s become a mythic time in the English mind of families set against each other, and also a time rich in radical thinking, new ideas, and new takes on old ideas (I went into this a little more in my 2015 post England’s eerie dreaming so I won’t repeat myself here). This is also a point that Adrian and I briefly discussed as an epilogue to his thread, which I’ll embed here because I particularly liked Adrian’s reply:

@lazcorp Odd, that. As if the whole Killing of the Divine King that Frazer banged on about lent a pagan recidivist cast to the whole era

A quick note: I’m only mentioning the English angle here because I’m English and so I can talk with some personal experience. I can imagine that there are similar-but-different conversations happening in Scotland about identity, place, and belonging, especially with many calling for a second independence referendum. And in Northern Ireland and the Republic of Ireland, as both countries examine their possible future relationship post-Brexit. And so on in Wales, across the rest of Europe, and across the Atlantic as well. But I don’t feel informed enough to discuss those.

There are a wealth of differing attitudes to the concept of local community/place/belonging rom the left/green “Think Global, Act Local”, social inclusion, and local co-operatives to the right’s us/them dichotomy, xenophobia, and isolationism. Of course the split is not entirely along political left/right lines - there are centre right politicians who are not isolationist (e.g. they’re pro-EU), and there are small enclaves of the green/left spectrum who have adopted varying degrees of xenophobia and/or isolationism (for example, author Paul Kingsnorth, a prominent green writer, unironically posed the question What might a benevolent green nationalism sound like?)

I think that of a lot of the specifically English input into this ongoing conversation has been about re-interpreting the concept of Englishness (or, if you prefer, the sense of identity related to place and belonging at a national level). By this I don’t mean the tired and uninformed “English culture is being eradicated by multiculturalism” bollocks that the political right churns out at the drop of a hat. In fact the right’s concepts of Englishness that are all-too-prevalent—fuckwits draped with Eng-ger-land flags; World War II as a solitary reference point for anything relating to Europe, whether it’s politics or football; a Blut und Boden ideology thinly re-packaged for the shires—are the things are have prompted the need to re-examine the whole concept of Englishness anew.

And the regular theme of conflict in Folk Horror between old ways and new ways, us and them, local and outsider, old Englishness and new Englishness, provides a ready entry point to explore this issue.

There’s been a lot of good work about Spirits of Place lately, from the book of the same name to the Landscape Punk of Hookland Guide et al. A recent interview with Alan Moore on his contribution to the Spirits of Place book mentioned above yields some interesting insights.

I’ve written about the concept at least a couple of times on this blog back in 2014.

Folk Horror has an intrinsic relationship with nature and landscape - something that has been explored in great detail by Adam Scovell. Because of the vast amount of (mainly online) really good analysis of this—particularly by Adam Scovell—I’m not going to go into any more detail here, just let you follow the links.

Andy Paciorek’s From the Forests, Fields and Furrows and Matilda Groves’ Past Anxieties: Defining the Folk Horror Narrative set out to provide some good definitions of the genre.

If you’re after a definitive article about Folk Horror films then Adam Scovell’s piece for the BFI is highly recommended.

Amd finally, within a day or so Adam Scovell’s book Folk Horror: Hours Dreadful and Things Strange will be published and I’ll probably have to rewrite all of the above post based on his new analysis!