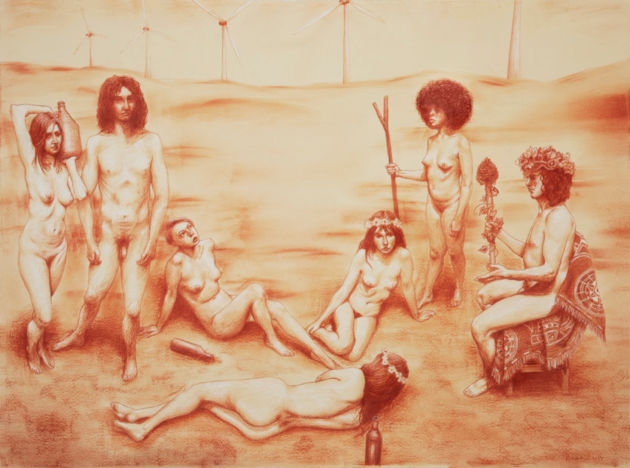 I’ve written about imagining progressive alternative futures here before, mainly as ways of breaking out of the chains of capitalist realism (most are tagged as Mark Fisher and/or Acid Communism if you want to read them).

I’d like to pick up that thread of thinking again, especially since Rowan Fortune retweeted something earlier today that got me thinking on this subject:

This is true. But, a caveat needs t
adding. We have the resources to support everyone, but not to sustain every imaginable way of life and the lifeworlds these give rise to. At least not without highly speculative technologies. We need to make the utopian case for new lifeworlds. https://t.co/lLh2SL770C

The original tweet is a graphic with no alt text, so for the sake of accessibility I’ll transcribe it here:

The Earth has enough resources to support everyone. The problem is that our global economy is built on wasting and unequitably distributing them.

This is true. But, a caveat needs adding. We have the resources to support everyone, but not to sustain every imaginable way of life and the lifeworlds these give rise to. At least not without highly speculative technologies. We need to make the utopian case for new lifeworlds.

And my response to that:

We all need to imagine new ways of life (and a sustainable future may contain many different types), talk about them, critique & amend or discard them accordingly, but offering them up to become part of the collective imagination is an urgent necessity.

When I talk about imagining new sustainable, progessive, possible futures, I am not trying to imagine the One True Progressive Future™ mainly because I don’t think there is one.

The argument often aimed at any sort of utopianist thought is that “but I don’t like your proposed utopia, so it can’t be a utopia because it’s being forced on me as an authoritarian regime, and so it’s really a dystopia, and therefore you’re a FASCIST!” (A line that frequently feels like it should be followed by “Curious! I am very intelligent.”)

Memes aside, this argument is mainly (but not always) used by those on the right wing of politics to shut down any attempts to try to make the world a slightly better and more equitable place.

However it does contain a germ of truth amongst its dissembling, in that there is no single utopia. Or rather that any utopian future cannot contain a single way of living, but instead a more utopian future would contain a multitude of different ways of living (and as Rowan says, they need to be sustainable).

So there are two tasks for those of us who want to imagine a more utopian future.

The obvious (and personally most compelling) is to imagine a personal utopia (or mix of utopias) - the ideal way of life that we want for ourselves, and as I said in my tweet, to talk about them, critique and then either amend or discard them accordingly, but most importantly to offer them up to become part of the collective imagination.