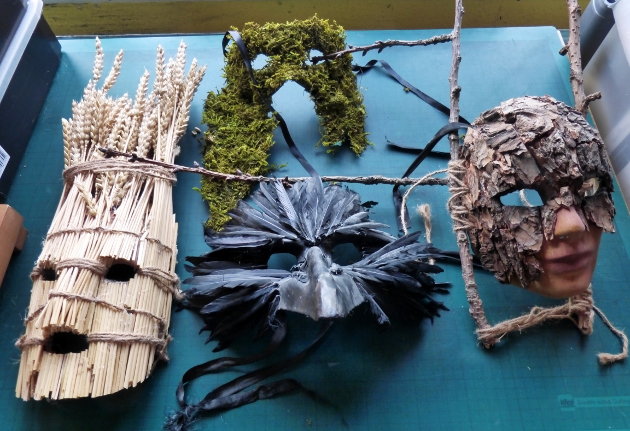 Over on Twitter yesterday I posted a series of tweets that, merged together, went something like this:

What I need is Brighton people who will dress up in masks like those in the photo [above] and these, and be filmed doing some sort of dark folk-horror dance/performance art/ritual. Performers may be filmed and photographed separately or together, then I distress the digital footage, add strange sounds, and produce some sort of strange, dark, experimental, eerily disturbing, short film. I'm just noting this vague idea down in public in case there's anyone crazy enough in/near Brighton to agree to collaborate on this!

It provoked some modest interest—although no volunteers so far—in the form of likes, retweets, and comments.

I’ve been thinking about this vague idea for some time now - it seems like a natural extension of the photographic work I’ve been doing with the masks I’ve made: non-linear and non-narrative, yet moving along some sort of path. I’ve no idea how to organise the logistics at the moment, but I thought I’d make a (public) note about it.

I think it would probably best be done in small sections: working with “models” (“performers” or “co-creators” might be a better term because I feel I will benefit greatly from other people’s input and ideas) individually for about 3 hours per person, rather than in groups, to create small sections of digital footage that I will eventually edit together into a single work.

Initially I thought about only approaching people with backgrounds in dance or performance, but the more I think about it, the less I think this matters - I’d prefer it to be inclusive.

I’d like to do this over the summer and autumn of this year, if possible, but it will depend on time and volunteers (if you’re in/near Brighton then drop me a line, either in the comments below or via the contact form on this website).