Although I only posted this photograph on my site and social media yesterday, it was actually taken at a photoshoot back in the autumn of 2020, in the window between the first and second Covid lockdowns in the UK.

The original idea for Our Lady of the Orchard dates back further - the earliest appearance in my note/sketch book is around November 2019. The original plan was for an outdoor photoshoot sometime in March/April 2020, but that was cancelled because of Covid. Finally, as mentioned above, it was created at an indoor photoshoot in late 2020. And then it sat on my computer, unposted. 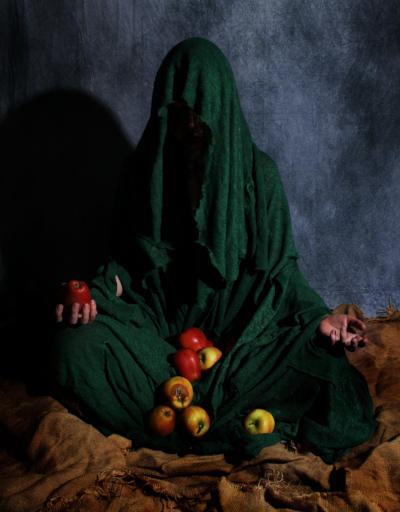 I don’t often talk about the process that I go through with photographs, so I thought I’d take the opportunity to do that here:

The photo was taken using my Canon EOS 7D Mark I camera with a Canon EFS 18-135mm lens. The figure was lit by a single studio flash fitted with barn doors to constrain the lit area. The flash was mounted on a high stand very close to the model and pointing down. That’s basically been my standard photography set-up for some years, although I’ve recently started introducing a softbox on the flash.

Initially I wasn’t entirely happy with the photographs (as with my usual working practice, there are about 25 different versions, each with slightly different lighting or pose or angle, from which I usually choose one). This was one of the first photographs where I moved away from a completely black background, and I also couldn’t help but compare it negatively in my mind to the original idea of an outdoor shoot.

I have looked back at it several times since the autumn of 2020, with a hazy conviction that the photographs were good, but needed some sort of treatment to get them to resonate properly with me. This past weekend I finally managed it.

I opened them up in GIMP (for those unfamiliar, GIMP is free image editing software, similar to Adobe Photoshop, but, as I said, free) and started idly tweaking the curves to adjust the tonal range of the photographs. One side-effect of using a traditional S-curve adjustment to the tonal range is that it tends to increase the colour saturation of the image, and it turned out that this was exactly what I needed to get the image where I needed it to be.

This was followed by some obligatory dodging and burning, and finally by a bit of localised desaturation of the hands (which had been rendered rather too red by increased saturation from the S-curve adjustment).

The seated pose is meditative, grounded (rooted like an apple tree?), the vaguest hint at a face under the shadow of the hood/cowl.

I deliberately picked a variety of apples whose skins varied from yellow-green right through to a deep red - I wanted that full range of colours.

I bought the apples a couple of weeks before the shoot, and knocked them about a bit to bruise them, determined that at least one would start to go brown and mouldy by the day of the shoot (which one thankfully did, and so was placed front-and-centre and angled accordingly).

The overall idea with the apples (apart from making the obvious connection to the figure being Our Lady of the Orchard) was to depict the full range of colours of fecundity and ripeness, but also the hint of the brown of mould, decay, and corruption amidst that glorious ripeness. It’s a bit of a truism, but you can’t have one without the other, as they’re all just parts of the same cycle.

The fact that the spirit-of-the-orchard personified is holding (offering?) a bright red apple is a passing reference to the tale of Snow White, to add some ambiguity to the character of Our Lady of the Orchard - are they an apple fertility spirit, a genius loci of the orchard, a goddess who demands payment for the fruit, or something more malicious? Or all of those things embodied in one figure.