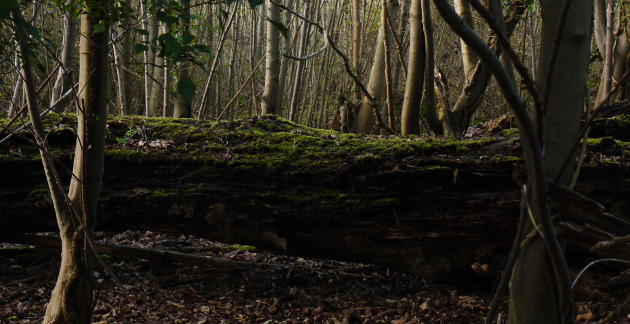 So we decided to go for a walk on Christmas Eve in Stanmer Great Wood, on the outskirts of Brighton, partly for exercise and some fresh air, and partly so that I could take some photographs of the woodland to feed back into my artistic practice.

I’ve been posting about nature and wilderness (and their relation to myth) in the context of my artistic practice recently (here and here) so it seemed a good idea to get out “into the field” rather than just theorising at my desk.

Stanmer has been occupied since Neolithic times, and Stanmer Great Wood runs along a cross-ridge dyke (a linear earthwork believed to be a prehistoric land boundary). Excavations in the wood and nearby have discovered artifacts from the Neolithic, Bronze Age, and Iron Age (some details from excavations canbe found on this page on the Brighton and Hove Archaeological Society website).

While discoveries go back to the Neolithic, the name Stanmer is Anglo Saxon (“stan” meaning “stone” and “mere” meaning “pond”: Stanmer village pond is apparently surrounded by sarsen stones).

Despite the age of the site many of the trees in Stanmer Great Wood are quite young, planted after 45% of the wood was destroyed in a great storm in October 1987. The older trees are generally felled and rotting, but the slowly decomposing tree trunks provide a good environment for fungi and moss.

The quality of light from the low winter afternoon sun was fantastic—I haven’t done it justice in the photographs—and the way it filtered through tree trunks to catch the already-rich textures of moss, ivy, and leaves was something I’ve tried to memorise for future artwork.

Despite the vast majority of the trees being relatively young and the woodland clearly being carefully managed, the atmosphere of the wood was pleasantly dank and dark, with ivy and moss covering just about anything it could, and leaf litter thick on the ground (apart from the well-maintained paths which were thick with flint - presumably local to the area, which would explain why it was inhabited in the Neolithic). I deliberately under-exposed my photographs to emphasise the darkness in the wood.

The artistic aim in taking these photographs (and a couple of hundred others not presented here) was to provide reference material for myself for future artwork. The photographs themselves won’t be appearing in my galleries on this website, but I thought I’d publish a dozen of them here to document how I gather reference material in my artistic practice.

As mentioned above, Stanmer Great Wood is very clearly a managed woodland and not in any way a wilderness (there’s almost a grid system of public footpaths overlaid on it!), so you could never forget that you were only half a mile from the extensive University of Sussex campus and a few hundred yards at most from the noise of the dual carriageway of the A27.

I suspect that I’m going to have to travel much further afield to find somewhere that feels more ancient and (relatively) untouched - I’m quite aware that wilderness doesn’t really exist in Britain any more, but it would be good to find an echo of it.

I’m not sure if the strange construction in the photo above (of which we spotted several in the wood) is a piece of land art, the work of drunken students from the nearby university campus, or part of the process of woodland management & conservation!

Click any of the photos above for larger versions.