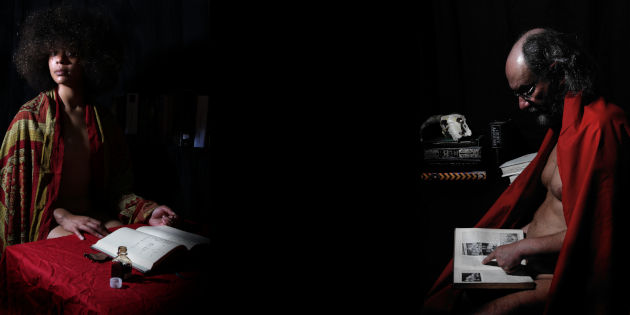 Prompted by some idle musing on Twitter the other day:

The photographic elements of my Acid Renaissance series could be seen as frozen moments from a strange spot-lit performance - part play, part dance, part ritual - from which you (the viewer) must infer the wider narrative.

I’ve never been good at narrative, at story-telling. While it would be a nice talent to have, it doesn’t really figure in my artwork. But it is inevitable that anyone, presented with a series of images, will infer not “series” but instead a sequential story.

This is not a wrong way of looking at the work - it’s an inevitable consequence. But the story your mind creates belongs to you, not me (I hope it’s a good one!). This might sound like a Postmodernist position, but it’s not.

One of the essential differences between Modernism and Postmodernism is that Modernist (and pre-Modernist) theory claims that there are absolute objective truths (for example, a piece of artwork has one true objective meaning - and that one true meaning is typically the meaning that the artist intended) whereas Postmodernist theory claims that there are no absolute objective truths, no “one true meaning”, and all interpretations are relative and equally valid.

This latter Postmodernist position seemed very clever until it landed us in a “Post-Truth” world where manipulative people in power could idly denounce factual evidence as “fake news” and proclaim any convenient lie as a fact that deserves equal attention and consideration. This aspect of Postmodernism doesn’t look so clever these days, and has a lot to answer for.

So returning to the previous subject, my position* is neither firmly Modernist or Postmodernist: my Acid Renaissance series, like my England’s Dark Dreaming series, consists of individual pieces of artwork, each of which has a primary intended meaning. It may also have secondary unintended meanings that have been unconsciously introduced by me. And then other people will also project their own meanings on them (but I use the word “project” here with the knowledge of both its normal meaning and also Freud’s definition of Projection).

However any meaning in the narrative that a viewer might construct between the individual pieces is entirely the creation of the viewer since there is no intended narrative in the gaps between the pieces. That story is your own responsibility.

* My position is subject to constant change, from minor revisions to complete about-faces - this is not a hill I’m willing to die on, and I’m not devoutly championing any particular position here, just trying to find a working definition that works for me as an artist, that will doubtless evolve over time.