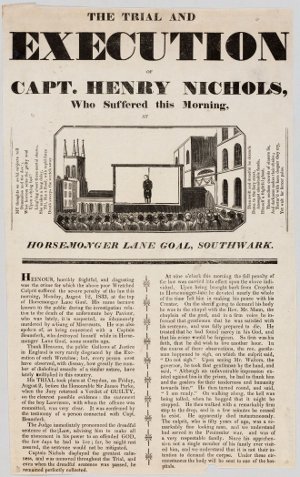 In early January I’m planning to print a number of Broadsides as related side-projects of the Book of the Erinyes.

As well as being appropriate to the whole atmosphere of the artwork, I’m also drawn to the often scurrilous history of Broadsides, from the 16th century to the mid-19th century. Their ephemeral nature—and the fact that they have been marginalised by some as “low” culture—means that we know far less about them than we should.

Broadsides—sometimes called Broadsheets—are large sheets of paper printed on one side only, designed to be pasted onto public house walls or sold by street-vendors (traditionally for one penny). They ranged from 13″ × 16″ (“foolscap” size) to over 5 feet in length.

They were the medium of choice for street literature from the 16th century to the 19th century, and were probably the very first “mass-media”. They fell out of use when Newspapers dropped in price enough to be affordable by common people.

According to the National Library of Scotland:

For almost 300 years until the mid-19th century, broadsides filled the place occupied today by the tabloid press.

Originally they were single sheets of paper, printed on one side only, designed to be read unfolded and posted up in public places.

At first they were used for the printing of royal proclamations, acts, and official notices. Later they became a vehicle for political agitation and what is now known as ‘popular culture’, such as ballads and scaffold speeches.

Ballads were a popular subject for broadsides (and seem to be the most documented subject), but they covered a wider variety of material including:

…often crudely illustrated with woodcuts (and later with engravings).

In her book A Culture of Fact: England, 1550–1720, Barbara J. Shapiro confirms the appetite for the macabre and sensational in the Broadsides:

…broadsides tended to report the unusual, the “monstrous,” and the sensational. Strange animals, unusual weather, “monstrous” human or animal births, criminal behavior, or accounts of witchcraft were among the most common items of broadside “news” hawked on the streets of London. Like the modern tabloid, these broadsides emphasized crime, violence, and wonderful cures. The sensational or “strange but true” were staples of broadside news and newsbooks.

In Printing and Parenting in Early Modern England, Douglas A. Brooks states:

For a penny, customers could purchase a religious primer, an account of the King of Scotland’s murder, a prayer for Queen Elizabeth, a description of a town-leveling fire, an epitaph of a London alderman, the complaint of a sinner, the ‘fantasies of a troubled man’s head’, or a political ‘flyting’ of a disgraced courtier—all inscribed in ballad verse and printed on a single sheet of paper. 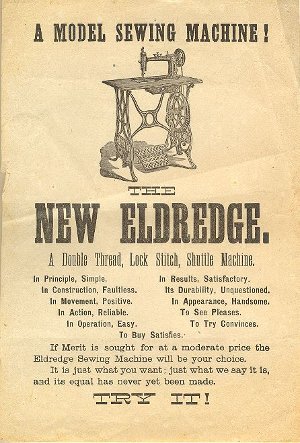 The use of broadsides for advertising merchandise seems to have started with publishers printing broadsides listing their books.

I am presuming that this apparent lack of advertising broadsides until the mid 19th century is actually because these items have not been preserved.

While Ballad Broadsides have long been collected—diarist Samuel Pepys collected over 1800 of them!—I suspect that advertising broadsides were considered as disposable as the many cheaply-printed flyers for double-glazing or takeaway food that are posted through my letterbox every day.

However if anyone does have any scans of, or information about, advertising broadsides from the 17th or 18th centuries then do please let me know.