I’ve just got back from Wiltshire where we’ve been wandering around the prehistoric ritual landscape that includes Stonehenge.

While Stonehenge is by far the most famous part of this landscape, I’m actually more interested in the wider ritual landscape—the Cursus, the Avenue, Woodhenge, Durrington Walls, and the hundreds of barrow mounds that dot the area—rather than just Stonehenge itself.

The idea of a large area of the land shaped as a mythic or ritual landscape is interesting, entailing landscape as a place of myth (and the re-enactment of myth in the form of ritual) while simultaneously being a lived-in landscape.

We walked along the Avenue—the presumed route of ceremonial progress to Stonehenge—and noted how, in an act of landscape-art showmanship, the monument only gradually became visible as you walked up the hill on the final south-western leg of the Avenue. Admittedly we could spot the stones from the east-west part of the Avenue prior to that across the fields, but wondered if woodland would have blocked such spoiler views back in the neolithic.

Along the way I picked up a few pieces of flint, some wool, and a collection of rook feathers, all of which will doubtless find themselves in my artwork at some point. 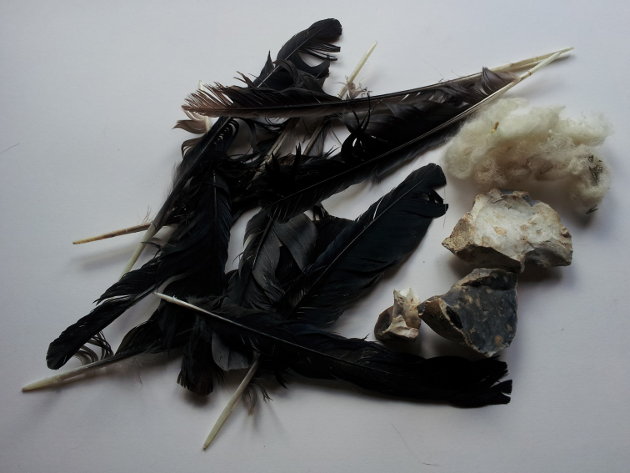 Now on to more practical matters:

This Thursday (28th May) I’ll be at A Brightonian Death, which will feature some of my artwork. You can find out more about this in my last blog post.

On Saturday June 6th I’ll be selling my artwork again at the Brighton Bazaar (at the Unitarian church, across from the Mash Tun pub in Brighton) along with my friend and fellow artist Margaret Kemp. It’s open 11am-5pm, so if you’re in the area please do come along - there will be plenty of stalls of arts and crafts as well as food.

And the week after that I’ll be working with Alice Kemp once more on some new pieces of artwork - a mixture of drawing and photography. Pictures will be forthcoming in a few blog post.