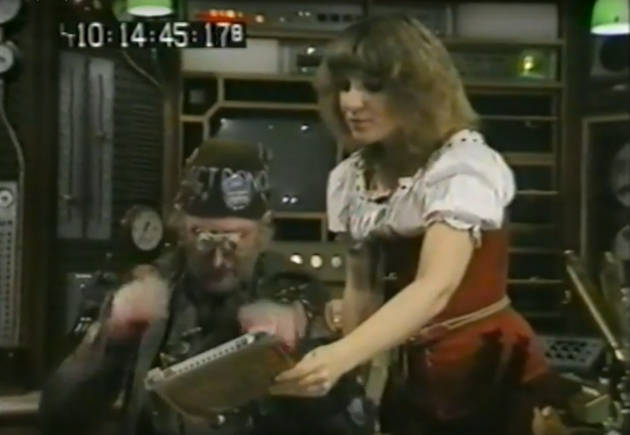 This isn’t a review, but rather an opportunity for me to expound about some of my personal interests — in my case utopias, acid communism, and the post-apocalyptic pastoral — using Stargazy on Zummerdown as a jumping-off point.

That said, I will be talking about the plot, characters, and themes of the play, so if such things are important to you then you should consider this as a spoiler warning and watch the following 76 minutes of vintage BBC TV before continuing reading this blog post:

I heard about Stargazy on Zummerdown through Stephen Prince’s new book A Year In The Country: Cathode Ray and Celluloid Hinterlands which examines the rural dreamscapes, reimagined mythical folklore and shadowed undergrowth of film and television. It also gets a few pages dedicated to it in Rob Young’s book from last year The Magic Box: Viewing Britain Through the Rectangular Window.

Stargazy on Zummerdown was written by John Fletcher and directed by Michael Ferguson, its sole broadcast was in March 1978 as part of BBC2’s Play of the Week series, and it has never been released in any other format.

The full play can currently only be found on Youtube (from which it is embedded above), and that’s a multi-generation copy smuggled out of the BBC by someone on the inside since the time code is overlaid at the top-left of the screen throughout. Stephen Prince does note that it is available for private viewing at the BFI National Archive, so if this degraded YouTube copy ever disappears then at least it’s not lost forever.

As mentioned above, Stargazy on Zummerdown was part of the BBC’s Play of the Week series, and it really does help to think of this as a theatrical play rather than as a TV drama not least because it helps you suspend belief despite the terrible studio sets (especially in the scenes on Zummerdown itself), but also because it allows me to unilaterally divide the play into three Acts which use increasingly theatrical devices, and in the third and final act switches from typical “realist” television dialogue into more theatrical monologues.

It’s also rather clumsy in a lot of places, in terms of dialogue, political tracts, and info-dumps. I’m not presenting it here as a masterpiece, but as a weird play that contains some interesting concepts.

However it does present an idea for a future from a time, unlike now, when you could actually have ideas about the future - as Mark Fisher wrote in Ghosts of my Life: The slow cancellation of the future has been accompanied by a deflation of expectations.

Imagine this play being performed by a travelling theatre troupe in front of a small wagon with portable sets (possibly on the outskirts of Zummerdown as part of the Stargazy festival) and you’re probably closer to understanding it as a whole than if you think of it as a TV drama.

Act I: infodumps and final demands

The handheld devices use VHF and look like 1970s walkie-talkies, the circular household video screens warm up with that cathode-ray tube fuzziness, and the online global database used to retrieve specifications for electrical parts looks archaic to modern eyes.

But credit must surely go to Fletcher in 1978 for predicting smartphones, video-conferencing, and the global internet as the predominant domestic technologies — there aren’t many science fiction writers in the 1970s who were quite so prescient — even if the aesthetic style of the props used to represent them is very much of its time.

Writer John Fletcher was a self-taught historian specialising in 17th Century England, and Prince notes that:

…in some ways Stargazy on Zummerdown could be seen as a historian’s utopian extrapolation of pre-industrial and socially progressive aspects of 17th-century life from around the time of the English Civil War.

This is the Commonwealth of New Harmony, in Albion in the 23rd century: an England renamed and reformed after a hundred year civil war culminating in a bloody battle on Salisbury Plain. Communities are divided into Aggros (primarily agricultural workers) and Toonies (industrial workers) who are bound together in a symbiotic relationship that becomes the main focus of the play.

There are some minor socio-political variations across the country — far-flung locations such as Derby are noted for working as a community co-operative whereas equally exotic Wolverhampton and Sheffield are said to favour more individual enterprise — but this is a new Albion that has explicitly rejected the two predominant 20th century ideologies of industrial capitalism and authoritarian communism and instead embraced some form of collectivist anarchism or anarcho-communism.

The backdrop to this is the Aggros and Toonies preparing their final demands for their annual negotiations in which the Toonies weigh-up how much food (and cider) they can provide over the coming year in return for the Toonies maintaining and expanding the Aggros’ infrastructure of wind generators, manure methane gas extractors, and solar energy cells. Yes, clean green energy was also something Fletcher highlighted as a writer back in 1978.

With final demands separately written and submitted sealed to the Reformed Celtic Church, who are acting as arbitrators, the parties make their way to Zummerdown.

Act II: to Stargazy on Zummerdown at Midsummer

Zummerdown is a small stone circle, and the studio set design quite possibly inspired the Stonehenge scenes from Spinal Tap. Putting that aside, though…

Stargazy is revealed as a multi-faceted festival in which Aggros and Toonies ritualistically play out the antagonism between the two groups. This takes the form of:

After these rituals another ritual begins: the negotiations between Aggros and Toonies. The Aggros are represented by Opinionated Alice (played by the redoubtable Peggy Mount) who is pitted against the Toonies’ Alf Smith (John Ringham).

The negotiations between the Opinionated Alice and Alf Smith are clearly reminiscent of 1970s unions involved in collective bargaining, and the play being broadcast just 10 months before the 1978–1979 “Winter of Discontent” is inescapable for the modern viewer.

The characters negotiate into the night, failing to reach a deal when the candle that lights the proceedings burns out, and at that instant arbitrator Father John Cuchlain of the Reformed Celtic Church declares that chaos reigns!

The slow dawn after the night seems to me to herald a third Act in the play, one in which dialogue turns more to a theatrical form of monologue.

Sidney Frederick Haynes, as Toonie historian, delivers a long monologue about how both industrial capitalism and authoritarian communism enslaved people.

A settlement of terms between Opinionated Alice and Alf Smith, between Aggros and Toonies, is agreed.

Another monologue, this time from Father John, ends with him marrying Ruth Baxter and Sidney Frederick Haynes in what Rob Young describes as a festive alchemical wedding…the marriage of town and country.

And to finish the camera pans out, revealing the play’s production crew, 1970s studio cameras, and a lighting gantry in the small television studio (presumably at the BBC Pebble Mill Studios near Birmingham). A visual apology for the small budget (“See - this is all they’ve given me to work with!”) or a reminder that you are watching a play and not a TV drama that contrives to be “real”?

The Commonwealth of New Harmony is not perfect, but it is a snapshot of a utopian vision, with checks and balances in place, such as the ritualised contests intended to defuse societal tensions, and the Stargazy festival to renew each small community’s commitment to collectivism.

Until someone can come up with a better idea for a future for England then Stargazy on Zummerdown is not a bad one.

Other reviews of Stargazy on Zummerdown found online: