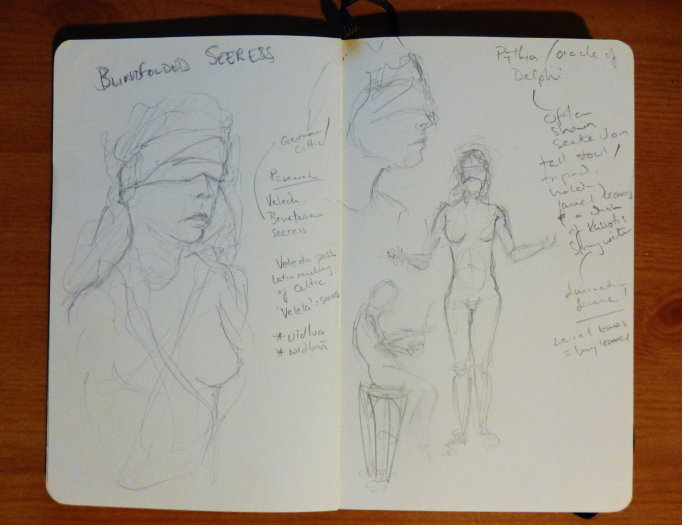 I'm currently working through some ideas for a new series of artwork based around the mythic figure of the Blindfolded Seeress.

The starting point was Pythia, the Oracle of Delphi, but I've also been researching Veleda (possibly a Latin rendering of Veleta), a Bructerian Seeress mentioned by Tacitus (the Bructeri were a Germanic tribe in Roman imperial times).

The blind seer/ess is a common mythic archetype – including the Graeae, who had just one eyeball between them, Tiresias the prophet of Thebes, and Odin who sacrificed an eye for wisdom. The general theme seems to be trading normal sight for second sight.

The Greek Themis – and the Roman version Justicia – was blindfolded (but only in portrayals from the 16th Century onwards). Eros was also sometimes shown blindfolded.

I decided to opt for a blindfolded seeress instead of a blind seeress simply because it's much easier to depict a blindfold than blindness. The blindfold then becomes an attribute of the mythological character.

Pythia was often portrayed holding laurel (bay) leaves and a dish of spring water for divinatory purposes, and I think I may borrow these attributes as well.

I'm going to be working on this theme over the next few weeks (in addition to doing some other work using some masks that I've had planned for some time), so I hope to have something to show soon.