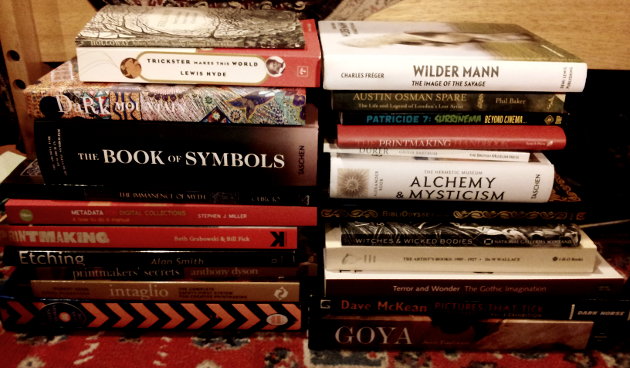 I seem to have got into the habit of only posting long-form posts here - reasonably long blog posts of 1200+ words. This is not a bad thing, but it has had the effect of making me shy away from posting here if I don’t have something of a similar size. The result is long periods of radio silence between lengthy monologues, and apparently I’m laconic enough as it is. Anyway I’m changing that, and I’m going to post some shorter-form posts such as this one.

I’m not stopping writing long-form posts, I’ll just be interspersing some short-form posts between them so that you know that I’m still alive and because a post doesn’t have to be long in order to be interesting.

Explanation aside, the photo above is my reading pile that lives on the floor behind my desk chair. Strictly speaking, it’s one of my reading piles: for books related to my art practice (my novels/fiction reading pile is entirely digital these days, and is even larger).

I tend to dip in-and-out of these books when I have the time, seeking inspiration and ideas, although sometimes I do go in for a marathon reading session.

And sometimes, like today, I look at it and wonder if I’m ever going to get the time to read all of them. When thoughts like that strike me there’s only one thing to do: order a couple more books, which is what I’ve just done.

For those interested, the pile consists of (in no particular order):