One of the fashions of the “Gothic Revival” during the mid-1840s to 1860s was for “monastic” style bindings that imitated the Medieval wooden book covers.

Rather than reproducing these in wood, the Victorians (presumably for reasons of cost and mass production) recreated this style with Plaster of Paris and a filler (possibly papier-mâché and antimony?), which was then formed in a rigid frame usually made of metal. Another source suggests they were made from “fibrous plaster and paper pulp reinforced with metal”. I suspect some more research is needed on my part!

The technique was patented by the British firm J. Jackson & Son. Print runs of over 1000 were needed to offset the expense of producing the complex molds, according to bookbinding historian Bernard Middleton.

From what I can find out, the technique seems to be especially associated with the British illustrator and illuminator Henry Noel Humphreys (1810–1879). Humphreys was influenced by his study of medieval manuscripts during a stay in Italy as a young man.

The finished results have been described as resembling “nothing so much as cast iron” (Bookbinding in the British Isles: sixteenth to the twentieth century, Part 2. London: Maggs Bros. Ltd., 1996)

Some Examples of “Papier Mâché” Bindings 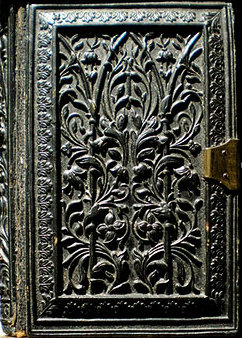 Black papier mâché of a Victorian Gothic Revival design in imitation of carved wood, featuring arches entwined with flowering vines in the central panel of each cover; covers bevelled. Spine with “Holy Bible” at top and surface of same also encrusted with vinework. Gilt roll on board edges and gilt dentelles on turn-ins; all edges gilt and gauffered in a diamond and dot design. Brass clasp, part missing. Binding attributed to D. O. Smith of London, as per McLean who illustrates an identical binding on an 1851 Bible from the same publishers.

Parables of Our Lord, edited by Henry Noel Humphreys, 1847. 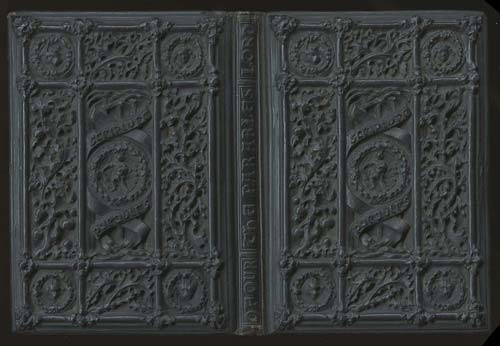 Parables is Humphreys’ first printed illuminated book in a papier-mâché binding. The publisher recorded that 2,000 copies of Parables were printed in 1847, of which 1,000 were sold to D. Appleton in New York with a changed title page. Longman’s printed a second edition in the same year. Each of the four corners has a wreath containing the head of an angel, a lion, an eagle or an ox, representing Gospel authors Matthew, Mark, John and Luke. Stylized oak leaves occupy the top and bottom central rectangles. The central figure is a sower within a wreath around which two ribbons are wrapped on a staff. “Scripture Parables” appears on the ribbons in raised Gothic letters.

The Coinage of the British Empire, by Henry Noel Humphreys, 1855. 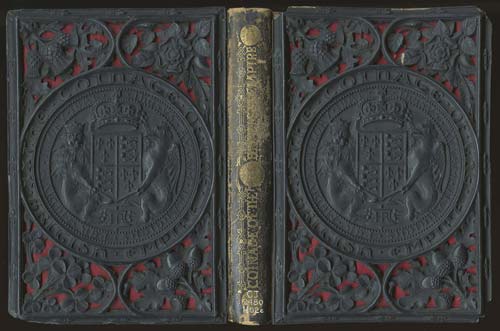 The central design of this papier-mâché binding is the royal coat-of-arms as it appeared on the reverse side of the gold sovereign of Henry VIII. The binding is signed “H R”, for William Harry Rogers.

A record of the Black Prince, by Henry Noel Humphries, 1849. 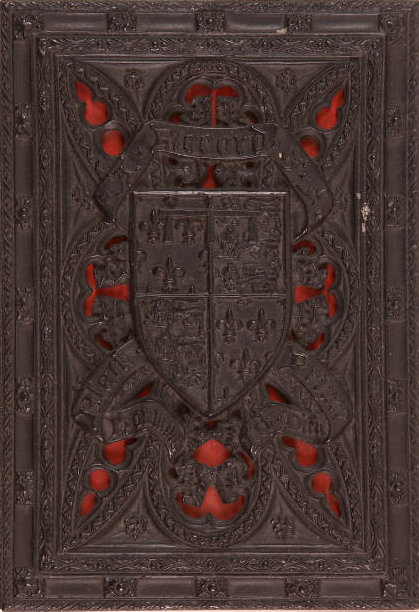 The carved cover is taken from one of the compartments of the Prince’s tomb at Canterbury, slightly altered by the addition of a label where the title was inserted and by the extra adornment of the mouldings. The turn-ins are blocked in gold. The design is identical for both covers. Two decorated raised borders are separated by a border of bosses. The central rectangle is filled with symmetrical medieval decorative motifs. The coat of arms of the Black Prince is on the centre. The title words are within a ribbon, which is above and on each side of the coat of arms.