Here’s a short illustrated story for you:

Steve Lieber is a comic book artist. He drew Underground, a graphic novel (written by Jeff Parker, drawn by Steve, and colored by Ron Chan). The story follows Park Ranger Wesley Fischer as she tries to save Stillwater Cave – and then has to save herself.

On Sunday (3 days ago, as of time of writing) a fan posted scans of every single page onto 4chan (EDIT: archive of the 4chan thread on Steve Lieber’s site), a well-known discussion forum. 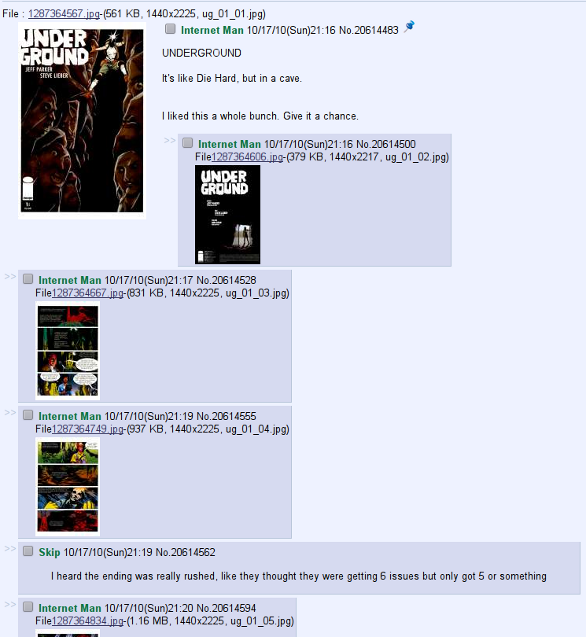 Yup, all Steve’s work is now out there for free. Steve found out via a message on Twitter.

He didn’t call in the lawyers.

Instead he went to the forum and joined in the discussion: 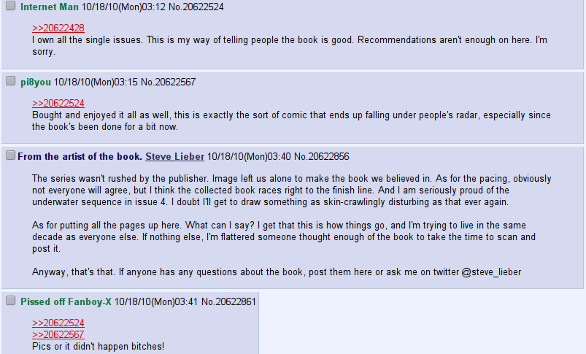 Techdirt have a much-used phrase for this: “Connect with Fans“.

Yesterday Steve posted a blog post – Whole book for free; or learning from 4Chan – explaining what had been happening.

What happened next? Well, today Steve posted a graph of his sales of the very same comic book (which he sells on Etsy): 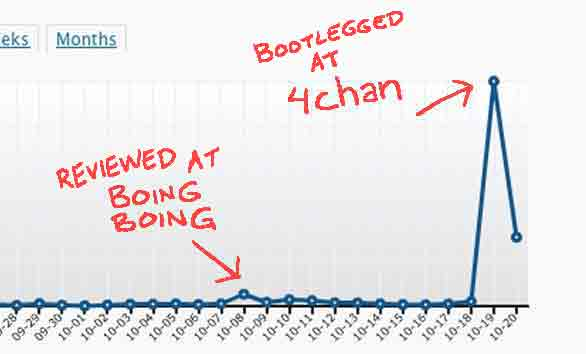 I don’t think that anything can really illustrate Tim O’Reilly’s argument that “Obscurity is a far greater threat to authors and creative artists than piracy” (and various other points in his seminal 2002 article) than Steve’s experience.

This has all happened in the past 3 days: a huge surge in sales thanks to “piracy”.

Steve Lieber is currently discussing this series of events on Warren Ellis’ WhiteChapel discussion forum if you’re interested to hear more of his experience and thoughts.

And you can buy Underground on Steve’s Etsy store.

I’m starting to wonder when we’ll see a “Dummies Guide to Getting Your Work Pirated” on the desk of every artist, writer, musician … and marketing executive.