In my earlier post on using Facebook to promote your artwork I promised an update on how it was going. So here’s the first update.

Rather than doing a massive campaign of promotion for my Facebook page, I’ve been doing a few smaller discrete promotions to study the effectiveness of each one.  It’s been a slow start, but things are building up. First of all, let’s look at Page Views: 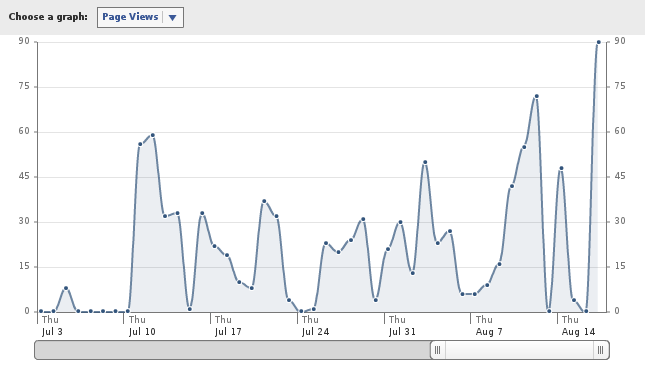 As you can see, it’s still low-level but the trend is definitely upwards.

So what have I done so far to promote it? Well, very little to be honest. I added a small mention of it in my last email newsletter and put a link to it on the front page of my website. I wanted to see what “organic growth” could be achieved first.

I haven’t used Facebook’s own “Facebook Ads” (the adverts that you see on your Facebook profile depending on your interests and basic demographic information). This isn’t so much a conscious choice as a technological flaw – if you’re using Firefox 3 on Linux then the JavaScript doesn’t work.

After submitting a support request I’ve been told that the Facebook Ads creation system is only supported on IE6, IE7, Safari, Firefox 1.5 and 2 (For “PCs” or Macs – I have the strange feeling that Facebook think “PC = Windows”). Whatever the definitions, Facebook won’t let me give them any money to run some ads. This may not be a bad thing – I’ve always been cynical about the effectiveness of interruption advertising, even though the Facebook ads are relatively inobtrusive.

I’ll be doing some more prominent promotion for my Facebook page in the near future (maybe a special offer or something similar). I’ll let you know how things go. If anyone else has been using Facebook to promote their artwork I’d be interested in hearing your experiences – please feel free to comment (and yes, you can add a link to your Facebook page!)