The Lazarus Corporation website first appeared on the internet at some point in 1996. A series of static HTML pages I put together to showcase my artwork. Thankfully no record of the appalling design of the nascent website exist. It was probably very black. 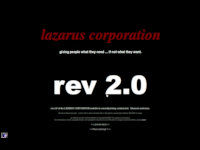 The first visible evidence comes from 2001, sometime after I launched version 2.0 (prominently promoted as “rev 2.0”). This was also a collection of static HTML pages I put together to showcase my artwork, and it was also very black.

That said, compared to the rest of the web back in 2001 which was dominated by Geocities- and Angelfire-hosted pages complete with blinking/scrolling text and unicorns for cursors, it was rather elegant and stylish. 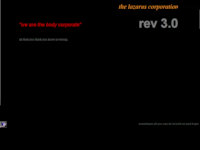 Version 3.0 was launched in 2002. It was still a collection of static pages, and it was still very black. But it did mark the point where the Lazarus Corporation stopped being merely a website to promote my own artwork, diversifying to bring in other artists such as long-term-collaborator Alice Kemp and French artist Françoise Duvivier. 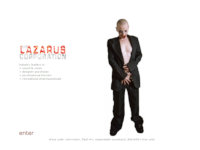 2003 saw the launch of version 4.0 of the Lazarus Corporation site. This time it wasn’t black, but it did have an “intro” page - a feature which can most kindly be described as “of its time”. Under the hood it had changed from static HTML pages to PHP, which made it a lot easier to maintain - a good thing because the number of pages was growing rapidly. 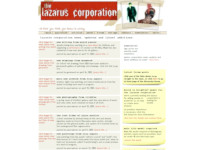 Version 4.2 was launched in 2005. The intro page was thankfully dropped and the site moved much closer to the format it has today, and several more artists and writers were on-board including Zenon Gradkowski. A bit of red colour livened up the site banner. A lively discussion forum brought quite a number of new visitors in - quite an achievement at a time when nearly every site on the web had a discussion forum. 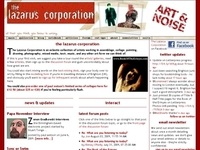 Version 4.3 was launched in 2007. Monitors had got wider, so the website became more elastic (and a lot more visual). Outposts on social networks started to be integrated, and the white, red, & black colour scheme set the tone for the next few years. 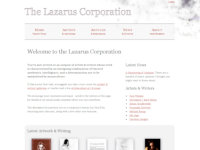 Version 5.0 was launched in 2010. The discussion forum was quietly shelved as social networks became the web’s preferred medium of conversation, allowing the Lazarus Corporation website to concentrate on visual art and long-form written content (the forum is still backed-up and archived, just in case). Colours got very white and light grey, moving the site design into the background to let the artwork dominate the screen.

And that brings us to the current website—version 6.0—which was launched in December 2013, mixing the best of previous designs - still keeping the clean white space, but adding just a splash of red. Actually we're on version 6.2.0 now after on-going tweaks and changes-of-mind. And we’ll keep going on.